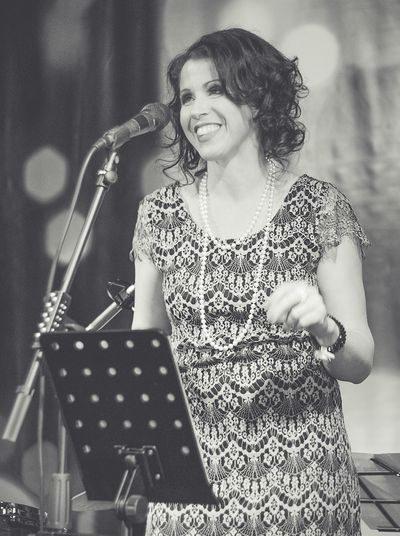 Hi, my name is Coco Favre, and I am the founder of ‘The Vocal Lab’. I have been singing and dancing on and off stage since I was 9 years old. Back then, I had no formal training but I learnt very quickly that if I wanted to sustain my voice during long rehearsals, extensive hours on stage and during multiple days in the recording studio, talent alone wasn’t going to be enough to get me through without damaging my voice!

I had my first singing lesson in my twenties but it took me years to find the right teachers who were able to show me how to really ‘sing’.

Twenty-five years later, I am still updating my knowledge of the human voice through research and training with exceptional singing professionals and voice coaches from around the world.

Coco Favre was born and raised in Switzerland into a very musical family. Multi-talented, she started dancing and singing when she was 9 years old and was lead singer of her first band at the age of 13. Her natural performing skills arise from her heavy involvement in the performing arts of music and dance for a variety of productions and music projects throughout Switzerland and Europe.

Coco has performed as a singer and hip hop dancer in many countries, including the wider Europe and North Africa where she was part of a Dance Company based in Geneva, Switzerland. Then moving on to become a session singer for recording studios, songwriters, composers, radio stations, and both cover and original bands in both Geneva and Wellington, NZ.

Coco’s experience as a singer for over 35 years, and her being not only fluent in English, French, Spanish and German but also sings in those languages which make her a very versatile vocalist who can sing almost anything. Coco’s fascination with music from different cultures comes from her passion for travelling as she has lived in many countries in her lifetime including Europe, Asia, USA and Mexico but it was New Zealand she chose to settle down in, 13 years ago.

After years of teaching vocals, she has realised her long-time dream of owning her own singing studio, 'The Vocal Lab'.

Some projects Coco has been involved with in the past are:


Coco has released her debut album ‘Introducing...Coco Favre’ in 2014 followed by her single ‘Heart of an Angel’ in 2016 produced by Tony Strong in 2016. She is currently working on her new album.

Coco Favre calls herself a bit of a ‘voice nerd’ since she discovered the fascinating world of voice science 5 years ago. (Don’t worry, she only gets carried away if you ask her about it!) Coco is a very patient teacher with many years of teaching experience in a vast range of areas. She is a certified open water scuba dive instructor and has been teaching scuba diving to international tourists in Thailand and Indonesia before settling down in New Zealand (NZ). Here, Coco spent 5 years teaching dancing to children and adults of all ages until she started teaching vocals at a local singing school in Wellington, NZ for 8 years. In 2016, she finally opened her vocal studio that you are currently reading about!

Coco has attended many workshops and seminars focusing on voice production over the last 12 years, including a smaller version of the selective 'Tuscany Project' in Nelson. There, she learned about the very essence of the human voice.

Coco has worked alongside top singing teachers and voice coaches who widened her belief that everyone can, indeed, learn how to sing. With her vast knowledge and experience as a working performing artist in the real world for the last 35 years, Coco offers a different teaching perspective, creating relaxed, positive and fun lessons for students of all ages and levels. Coco knows that we sing better when we sing the songs we truly love and being multi-linguistic, she can also teach you songs in a language other than English (i.e. Spanish, French, Italian, Portuguese and Swiss-and German).

A singing lesson with Coco isn't just about training your voice, but a whole body and mind connection with the songs you are singing. Without this connection, your voice may sound lifeless and flat and your audience won't believe your story!